What you will learn

Discover how “loss aversion” shapes our decisions in the real world. It’s a handy marketing tool, but it does come with some caveats, which is why it’s important to use it wisely. How can you use the right wording to ensure loss aversion kicks in? And what should you avoid so that it doesn’t backfire?

It’s way more complex than evoking a FOMO response and saying “you don’t want to miss this.” You’ll learn how to set a reference point so that your price will make more people want to act on it, because not acting on it would be perceived as a loss by potential customers.

IKEA gets a load of airtime in this e-book, which is not all that surprising given the cognitive bias known as the “IKEA effect.” What role does this phenomenon play and how can you use it to your advantage?

We tend to overvalue what we own. So how can we make customers feel like they own something before they’ve even purchased it? Meet another one of loss aversion’s ramifications: the “endowment effect.” 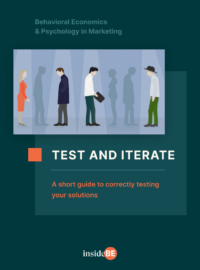 Test and Iterate: A Short Guide to Correctly Testing Your Solutions

This e-book will guide you through all the essential knowledge required to test an intervention. Learn all the steps you need to take to test efficiently. 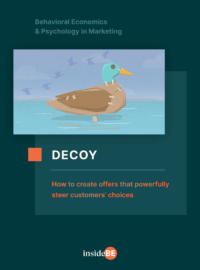 Decoy: How To Create Offers That Powerfully Steer Customers’ Choices

Don’t touch the price of the product you want to sell more of, you just add a clever third option that makes all the magic happen. And that’s the Decoy effect.